Murder at the Museum! Wayne A. Drew’s latest sell-out novel.

STOP PRESS!  First edition paperbacks of Wayne A. Drew’s latest thriller novel, ‘Murder at the Museum’, featuring The Fan Museum’s director Hélène Alexander as a leading character, are about to sell out via our online gift shop! 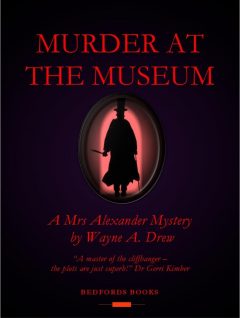 About ‘Murder at the Museum’…
Hélène Alexander, MBE, the Founder and Director of The Fan Museum, has been a leading character in five thriller novels written by Wayne A. Drew, a long-time supporter of the Museum. Three female “partners in crime” of a “certain age” are the main characters in each book, with Mrs Alexander playing a major role.  ‘Murder at the Museum’, Drew’s sixth novel in the series, was written to celebrate The Fan Museum’s 30th Anniversary in 2021. Set in 1996 at the lovely Museum itself, in the heart of picturesque Greenwich, they are confronted by their most terrible adversary yet – a ruthless killer who stalks the misty autumn lanes.

More News from The Fan Museum

Mrs. Alexander is the youngest of the four girls born to Victor Adda and Marie, née Mosseri, in Alexandria, Egypt, a city much glamorised by Durrell in The Alexandria Quartet. The Adda and Mosseri families were two of the country’s most renowned Sephardi families, with marriage bonds connecting them also to many of the other great Jewish mercantile and professional dynasties of Egypt and the Sephardi world.

Following on from the success of last year’s opening season of Talking Fans we are pleased to announce the start of Season II of Talking Fans, comprising four online presentations for Spring/Summer 2022. Delivered by the Museum’s expert curatorial staff, each of the talks will cover a different aspect of the multi-layered history, culture, and artistry of the fan.

The Fan Museum is delighted to announce the launch of a new partnership with Art UK, the ‘online showcase for art in every UK public collection’.  The project facilitates broader digital access to the Museum’s outstanding collections and spotlights our treasures on a platform which attracts a global audience of art, history and culture enthusiasts.

Enter a search term below to search the whole website.

50% discount on the Adult price tickets

Free entry for disabled visitors and carers (except for groups)

Please note that the discounts listed above cannot be applied when visitors are part of a large group visit or guided tour group.  Please click here for further details.

Please note: The Fan Museum will be closed to the public on Saturday 2nd July, but will reopen as scheduled the following Wednesday 6th July.

Additionally, the Fan Museum is unable to accept any new guided tour or private event bookings for the entirety of September 2022. The Museum will, however, remain open to the public Wednesday-Saturday, 11h00-17h00.

Thank you for your understanding.